I have spent a lot of time “offline” the past week.  Part of it is related to the events in Newtown, Connecticut.  I just wanted to spend a little extra more time with my two children because I could not imagine the horror of having either of them taken from this world in such a savage way.

Also, it was a snow day on Thursday.  Iowa and the rest of the upper Midwest got walloped on Wednesday night and Thursday morning.  Here in Cedar Rapids we got anywhere from 6 to 9 inches of snow and had winds that blew in excess of 50 miles per hour.  Pretty much a textbook blizzard.

Everything slows down on a snow day because no one goes out.  Life really turns inward toward the household.  Snow days are most excellent.

On to the links…

EPA Goes After Dangerous Soot Pollution–This is one of those “boring but very important” type of stories.  Soot is dangerous on so many levels and the EPA is taking steps to clamp down on the emission of soot.  Good deal all the way around.

Cleaning up Carbon Pollution 101–This is a good run down of the facts surrounding the issue of carbon pollution.  Read it and be informed for the next time you have to argue about carbon pollution with your libertarian Uncle Walt who lives in Phoenix.

Exploring a Proposed Carbon Diet for American Power Plants–The Natural Resources Defense Council has come up with a proposal for reducing carbon based power generation in the United States that focuses on all aspects of the chain.  It’s pretty fascinating stuff for people who read up on this kind of thing.

To Save the Oceans, Should We Zone Them?–I do not know if this would really do any good because individuals, corporations, and countries are not know for being sticklers when it comes to rules.

Detect Drafty Windows with Your Smartphone–Does anyone ever sit back and marvel at just how freaking cool our smartphones really are?  These things are like something out of Star Trek but better somehow.

Small is Big, Bangladesh Installs One Million Solar Home Systems–I am excited by the potential of the developing world to leapfrog the centralized and heavily carbon based electrical generating systems that dominate in the West.  Here is just another story about the power of distributed generation.

Plans for Giant 1.2GW Wind Farm Submitted–Not that big energy projects cannot be fascinating or get us closer to a carbon free future.  The East Anglia Offshore Wind (EAOW) will provide 1.2 gigawatts (imagine Doc Brown saying it) or the equivalent of about 770,000 annual electricity consumption.

Feds Scrap Dumb Idea of Relocating Otters–Who thought this was a good or plausible idea in the first place?  Why would an animal suddenly decide to stay in a place where it was unfamiliar?  Because some agent from the state fish and wildlife service packed it in a crate?  Sure.

Imagine There’s No Fracking–It’s easy if you try.  Sean Lennon and Yoko Ono recently ran the following ad in the New York Times: 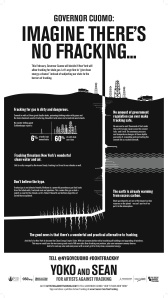