Depending upon how you calculate the numbers transportation is now the greatest source of emissions in the United States: 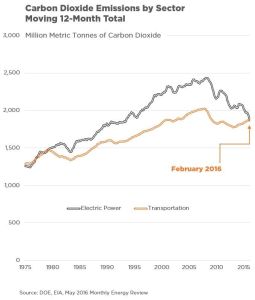 No matter the degree to which we decarbonize are electric grid the effort will be for naught if we do not begin to address the emissions that are a result of our transportation choices.  Transportation emissions come from a lot of sources—personal automobiles, delivery vehicles, mass transit, etc.  The most direct control that we have over transportation emissions is to control how much we drive personal automobiles.  If we do not drive our vehicles do not produce emissions.  It is a fairly simple calculus.

Do not drive a mile, save a pound.  It is a direct, one-for-one relationship in my mind and it makes for a fairly simple accounting of progress.

The average American drivers puts 13,474 miles per year in behind the wheel or, according to my simple math, creates 13,474 pounds of carbon dioxide via combustion to drive.  That is a lot of carbon dioxide.  To put it into comparison, the solar array on my home that went active last August is calculated to have saved approximately 3,350 pounds of carbon dioxide in just over seven months.  If the average driver reduced miles driven by approximately 25% the savings would be roughly the same.  This is why we have to address our addiction to fossil fuels in the transportation sector in order to have any significant impact on reducing greenhouse gas emissions and arresting climate change.

My goal for the next nine months is to drive less than 2,500 miles in total.  Why 2,500 miles?  It’s the length of time, in miles, until my next oil change.  Why nine months?  It’s the length of time, in months, before my next trip to Colorado. Everything seemed to line up in such a way to make this an easy target to measure and understand.  This would also put me on pace to drive approximately 5,000 miles per year including regular trips to Colorado.

A goal of 5,000 miles per year or less would mean a reduction of almost 63% versus the average American driver and a similar reduction in carbon emissions.  Now imagine a world where the United States reduced its emissions from transportation by 63%.  Wow.

It is not just a story about emissions.  Personal automobiles are expensive.  Most people do not realize the full costs of driving in a way that is easily quantified.  You could spend a lot of time calculating the actual cost per mile of driving for your particular situation or you could just let the IRS do the leg work.  For 2017 the IRS has set the “mileage rate” at 53.5 cents per mile.

In my particular case nine months of driving will cost $1338.  However, every trip to work that I replace with a bicycle trip will save me $6.  Greenhouse gas emissions are hard to imagine.  Six dollars in my pocket every time I decide to commute to work on the dirt wagon is concrete.  Somewhere along the way I am going to translate these savings into a Chris King headset for my bike.

I anticipate a degree of failure, but I feel that I will make little progress toward an ambitious goal unless I make some sort of public proclamation.