Upslope Brewing Company from Boulder, Colorado was a new name to me as I perusing the refrigerated cases at the liquor store in Steamboat Springs. My knowledge of Front Range breweries runs toward the Denver metro and ends about there and as a non-resident I am not too unhappy with that performance.

Started in 2008, Upslope Brewing has a year-round lineup consisting of five beers and a rotating lineup of special releases. One of the year-round beers is Craft Lager: 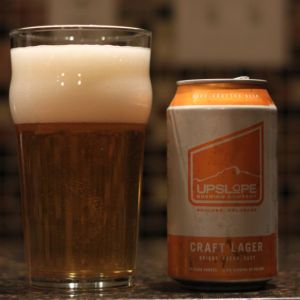 It’s a light lager with middling alcohol (4.8% ABV) and almost no bittering (15 IBU). When it’s cold it goes down easy and that is about all that you remember.

Utilizing a mild hops like Saaz for such a small amount of bittering leaves little aroma or non-bitter flavors to be exhibited. A light lager seems like a perfect blank canvas to experiment with some subtle flavors that might get lost in a beer with a more malt heavy body. I have seen this style used to showcase rose hips, ginger, peppercorns…the list goes on for a while. Some of these experiments were successful and others were less so. Some were even non-qualified disasters.

This beer was inoffensive to the point of being boring. It’s really no different than a hundred other lagers out there. If what you want was the bare minimum in beer flavor just pick the cheapest option out of the cooler and call it a day. This lack of any character is actually something that experts think is afflicting the German beer market. Sales of beer and consumption have fallen a lot recently. Experts peg the reason being the wide proliferation of a few similar styles of beer. Basically, beer is boring in Germany and consumers want something with a little excitement.

I was hoping that after a good experience with Oskar Blues Mama’s Little Yella Pils that I would feel warm and fuzzy about lagers. It was just not to be:

As a note, Upslope Brewing Company has committed to donating 1% of the revenue from Craft Lager to Colorado Trout Unlimited through the 1% for Rivers Campaign. If you are into that sort of thing.