The attempt to solidify a “house” pale ale recipe for my keezer is a frustrating process. First, there is the lead time inherent in homebrewing. It is four to five weeks between batches because I prefer to allow the batches to keg condition much like you would bottle condition. Second, small variations in the process can produce some pretty divergent results. Your yeast could produce bubblegum esters or your hop profile could come out flat. Argh!

Each of these “house” pale ale recipes is going to seem a little derivative, but that is the point. My recipe was as follows:

iBrewMaster figured that the beer came in at ~3.7% ABV and ~32 IBU. Fairly light and easy drinking for the higher temps of early summer. What was the result: 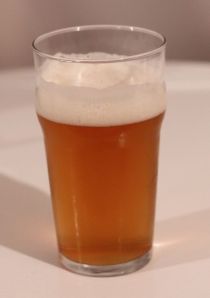 It’s a very light beer in terms of body and alcohol. Unlike my prior house recipe there is a more pronounced hop character, even though the IBU rating is the same, which I am chalking up to the use of Cascade hops. The hops’ resin character can stand up to a full 60 minute boil better than some other varieties…yes, I am looking at you Citra.

The beer came out very similar to my prior House Pale Ale #2, which was to be expected considered that the primary departure between the two recipes was the change in hops. I also changed the steeping grains from a Caramel 40L to a Caramel 20L which did result in a slightly lighter body.

I would like to say that this beer is a 2.5 mug rating, but I am not going to start parsing mugs down into fractional units. Therefore, it gets two mugs because I like to err on the side of pessimism.