Someone should stop me from going to the grocery store without adult supervision.  I stick to the list—one which I made by the way—until the end when I begin wandering the “health market” section where my local grocery puts a lot of the natural or organic products and the liquor store.  For those of you who cannot imagine a full-line liquor store in a grocery store—I am looking at you people in Minnesota—it’s a damn nightmare because so many beer options are just a short stroll away from the produce.

A sampler pack from Samuel Adams got me again.  First it was …? And then it was …?  Now it’s …?  Someone save me from myself.  I think what gets me every time is that these twelve packs contain six different beers, so I am really able to sample some different varieties without much commitment.  That’s it I am a commitment-phobe.  Nailed it!

The six beers in the Harvest Collection sampler were Boston Lager, Ruby Mild, Oktoberfest, Hazel Brown, Latitude 48 IPA, and Harvest Pumpkin Ale.  Enough ink has been spilled about Boston Lager in this blog and every other beer themed outlet to fill several barrels, so I will leave well enough alone.  I usually save the bottles of that beer for visitors less inclined to experiment with a dry-hopped single hop IPA like the most recent creation in bottled in my basement.

Ruby Mild is a nice place to start:

The beer is truly mild with a low bitterness (20 IBU) and middling alcohol content (5.6% ABV).  I would be inclined to characterize this beer as an American amber ale, but the description from the brewer puts it more in line with traditional English ales.  The ingredient list supports this classification as it uses hops of European origin and malts more associated with English brews.  Had it been hopped with Cascade or Willamette hops instead of East Kent Goldings the story would have been different.

Nonetheless, it is an enjoyable drinking experience.  European hops tend to be less “in your face” than some of the more well-known American varieties and the flavor profile is a little more mysterious that it lends an air of experimentation when drinking beers hopped in such a way.

Oktoberfest is another European inspired beer:

In my neck of the woods when six packs of Oktoberfest inspired beers—particularly the variety from Samuel Adams—hit store shelves several beer drinkers I know stock up for the coming months in the knowledge that it will disappear shortly.

If you read about the beers that are consumed on the Oktoberfest grounds the beers need to conform to three criteria: adhere to the Reinheitsgebot or “Bavarian Purity Law,” have an ABV equal to or greater than 6%, and be brewed within the city limits of Munich.  Obviously, this leaves a lot of room open for interpretation.

Given these criteria, Oktoberfest from Samuel Adams does not qualify.  It’s lower in alcohol (5.3% ABV) and is not brewed within the city limits of Munich.  However, this is America and we are known for not adhering to rules of style.  It’s what makes our beer culture so dynamic.

Regardless, Oktoberfest is an easy drinking fall beer.  It’s almost like the fall equivalent to summer’s lawnmower beers.  It’s easy to sit down by the outdoor firepit on a cool weekend evening and sip a pint as desiccated leaves blow past. 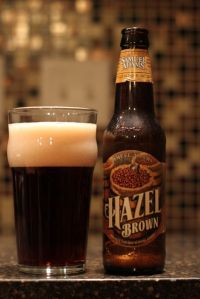 Hazelnuts are one of those holiday delights from my childhood that stick out.  Every year about this time a bowl of mixed nuts in the shell would appear with a couple of nutcrackers on the kitchen table.  After dinner everyone would sit around with a beer or coffee and crack nuts until it was bedtime.  I always loved the delicate flavor of an actual hazelnut.

Too bad everything that is hazelnut flavored loses the delicate part in favor or amped up flavor.  Hazel Brown is no different.  You notice it from the moment that your nose hits the rim of the glass.  It’s like walking into a coffeeshop that is brewing a pot of hazelnut flavored coffee.  It overpowers everything and just sticks to your olfactory receptors.

I was really disappointed because brown ales or nut brown ales are one of the beer styles that I feel has gotten a short straw in the race to produce IPAs of increasing extremity.  Newcastle’s version is one of my formative beer experiences and I have enjoyed brewing examples of brown ales in my basement for a while now.  It’s a great style to brew yourself because it is very forgiving.

Everyone has an IPA nowadays and the Boston Beer Company is no different:

In the description of the beer the hops used read like a menu of craft beer hop varieties: Hallertau Mittelfrueh, East Kent Golding, Zeus, Simcoe, Ahtanum, and Mosaic.  The big deal here is the Mosaic variety.  If you believe the hype than this is the next big thing in hops.  Described in different terms as “Citra on steroids” or “Simcoe, only better.”  With such a wide variety of hops included in the beer already I do not know if Mosaic was given a chance to shine on its own.  It seems like it needs to be used in a single hop experiment to really showcase the hop profile.

The other marketing rhetoric with Latitude 48 is that all of the hops are grown near the 48th latitude.  Okay, I’ll bite, why is this a big deal?  I cannot seem to find an answer.

In the end Latitude 48 is like an IPA with training wheels.  It’s okay, but there are literally hundreds of examples of the style that are better.  The beer is supposed to be mid-high in terms of bitterness (60 IBU), but I did not think that it drank anywhere near that which I am attributing to the muddled profile from so many different varieties of hops being used.  Editing is a skill that can be used to produce superior beer.

When the season begins to change pumpkin becomes the flavor of the month.  All right, the whole pumpkin or pumpkin spice flavored hysteria has gotten out of hand because you start to see items appearing at the end of August.  Sorry marketers but August is still very much summer in my neck of the woods.

Nonetheless, pumpkin ales are a big deal for the American brewing community and Samuel Adams has put forth their own example:

The first aromas that I noticed were unmistakably pumpkin.  But, it was more like the aroma of pumpkin that is left on your hands after carving a couple of jack-o-lanterns with the kids.

Honestly, I could not get over the aroma as I drank the beer which was really an unremarkable ale save for the pumpkin aroma.  I guess that pumpkin is like bananas for me.  Once I get a whiff, it’s all that I can think of for the duration of the glass.  Granted, I am also the same person that almost gags when I catch the first whiff of a pumpkin spice latte on my infrequent trips to Starbucks when the weather turns cold.