A Higher Purpose for Hefeweizens

My distaste for hefeweizens is not something I am shy about.  Considering that recently I have decided to cut my beer consumption down to a single night a week or less, I am left with some odd duck beers in the back of the refrigerator.

For some people, this might mean a few cans of Pabst Blue Ribbon gathering dust behind that jar of pickled jalapenos. In my house it means a bomber of Steel Toe Brewing’s Sommer Vice:

Sure, it’s a hefeweizen. Why would I waste my limited beer drinking bandwidth on a hefeweizen? The answer is that I would not.

However, I have found a higher calling for these witch’s brews of banana and clove esters: 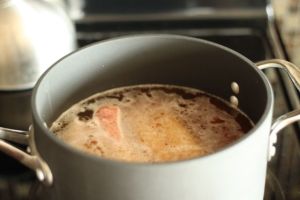 Par boiling brats prior to grilling is a honorable way for a beer to meet its demise.

The first beer I drank from Steel Tow Brewing was big and brassy—Size 7 IPA—but Provider Ale was a totally different experience:

At only 5% ABV and 15 IBU there is little “big” about this beer. It is also hard to categorize. It’s not a wheat beer, even though it pours with a golden straw color and is unfiltered. It has some sweetness and the hop notes are floral as opposed to resinous.

If you were looking for an analog I would suggest a cream ale like New Glarus’ Spotted Cow or Galena Brewing Company’s Farmer’s Cream Ale. These are both light beers that pour like a wheat beer but have a very different flavor that is hard to categorize.

These beers are actually quite hard to pull off from a technical standpoint because there is little hop flavor and aroma to “hide” behind when off flavors present themselves in the malt body of the beer. I have also found these beers to be heavily influenced by the temperature at which they are fermented. It might be the exact same recipe, but the fermentation spent a few days at a temperature higher or lower than ideal which leads to a totally different beer. Trust me, I have brewed Northern Brewer’s Speckled Heifer partial mash kit a few times and each batch tastes noticeably different. Not bad, but definitely different.

If Provider Ale and Size 7 IPA were poured side by side a person would be hard pressed to know that these beers were from the same brewery. It is a very different approach to beer in each glass:

In my zeal to drink the bounty of brews that I smuggled home from Colorado—many more opinions on beers from the Centennial State are forthcoming—I forgot the handful of bombers from Steel Toe Brewing that I picked up on my trip to Minnesota over the Fourth of July. Beer…hidden in the back of the refrigerator…have I committed a crime?

Steel Toe Brewing was founded in 2011 in St. Lois Park, Minnesota which is a “suburb” of Minneapolis. I do not know what qualifies as a suburb anymore since people in Prior Lake seem to believe that they are part of the Twin Cities metro area. I digress.

The brewery has a lineup that consists of four year round beers: Provider Ale, Rainmaker Double Red Ale, Dissent Dark Ale, and Size 7 IPA. There is a selection of seasonal beers, but I am too lazy to list them out on a Monday morning.

This weekend I grabbed a Size 7 IPA bomber and got to drinking:

Despite the diminutive nature of the name—heck, even I wear a shoe bigger than size 7—this is a big, brassy beer.

Do not pick up a bottle of Size 7 and think you are going to sip it while enjoying some light snacks. This is a beer that requires boldness in all that endeavor to complete a pint. Drink it with a side of bacon or a bowl of habaneros. Do not be subtle because Size 7 does not do subtle.

The brewers at Steel Toe do not want me to say that the beer is balanced. They even go so far as to say: If you ever call Size 7 balanced we’ll kick you where it hurts (in the hop sack). Fair enough, but with the golden correlation of ABV (7.0%) and IBU (77) coming in close to balance there is something to be said for that adjective. I just won’t come out and say it because I like my hop sack the way it is…unkicked.

If this beer has a downfall it is that it is too much. By the bottom of the second glass you are starting to look elsewhere for your liquid refreshment because you need a break:

My latest attempt at a base recipe for beer experimentation has turned out well:

A little hoppy, but I was kind of going for that kind of flavor profile because I found the previous homebrews a little “light” on the aftertaste.  I felt that upping the hops would take care of the falling off flavor profile.  It did the trick.  The bitterness is about right, but I do not know that the aroma is quite there yet.  I guess that I will have to brew some more beer.  Damn!

I am really excited to try all three, but the California Common has me most jazzed.  It taked me back to my days as a graduate student in history at the University of Iowa where a friend introduced me to the charms of Anchor Steam. Simpler times.

The Innkeeper is already in the carboy and it is krausened!  The reviews across the Internet are nothing but complimentary for what is produced by this recipe.  Oh yeah!

Near the town where I went to high school and college Olvalde Farm and Brewing Company is starting to put out some unique beers.  Auroch’s Horn, some brewed with sweet rhubarb, is the mainstay of their production right now:

The hop profile is near perfect.  However, the beer is potent.  How potent?  Approximately 10% ABV, which is a little sporty for me.  I like a beer that I can repeat drink over the course of the evening.  Spend too much time drinking these and you will end up in a ditch like that guy in the DirecTV ad.  I like eyepatches.

I know some of the people involved in this operation, so I am hoping to schedule a visit to get a first hand look at how things come together.

A Lot to Try

My next trip to the Twin Cities is shaping up to be a metro wide beer hunt.  My brother is working up a list of establishments that will allow us to sample the best of Fulton Beer, Lift Bridge Beer Company, Harriet Brewing, Boom Island Brewing Company, and Steel Toe Brewing.  Good times.