It is time to take stock of my so-called New Year’s resolutions for 2019 and see how I did.

For 2020 I am going to try and build on what was done in 2019.  The goal is to improve each year.  Different goals or different metrics, but the overall theme is improvement.

It is now October and that means it is fall.  It also means that I am nine months of the way through the year which is probably a good time to check in on where I am at with my resolutions or goals for 2019.  Here goes:

June has come and gone.  Summer is officially here.

It also means that it is a good time to check in on where I am at with my resolutions or goals for 2019.  Here goes:

Drinking Local in the Second Quarter of 2019

Here is what my beer purchasing looked like in the second quarter of the year: 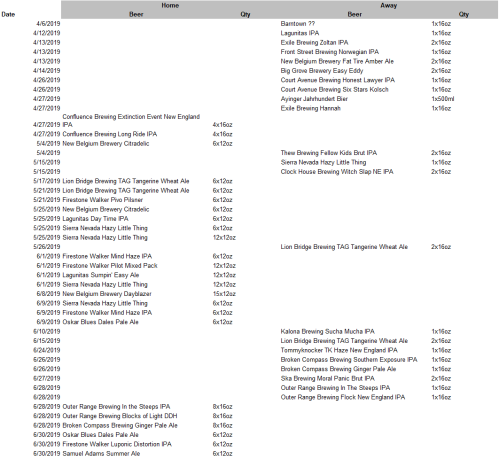 I want to apologize to the brewers at Barn Town Brewing for forgetting exactly which of their beers I drank following a spring bike ride in April.  It was an IPA and it was hazy.  After that my  memory has completely failed me.

A couple of things stand out.  First, I went a little overboard with the cans I brought home from Summit County.  There is no way to get Outer Range Brewing or Broken Compass Brewing beers except in the high country.  Plus, I wanted to share the experience with some people back home so I loaded up the cooler and acted like an old school bootlegger.  Twenty four cans of beer does not exactly make me a bootlegger, but let me have my moment.

Second, I bought a lot of so-called “middle craft” beers from brewers like New Belgium Brewery, Sierra Nevada, Firestone Walker, and Lagunitas among others.  Normally I would have little reason to choose a national craft brewer over something more local but a combination of grocery store sale pricing and rebates via the iBotta app changed my behavior.  The combination of the two often meant that I was buying a twelve pack of Sierra Nevada Hazy Little thing for less than $14.  That would compare with a local beer selling for $18-20 for the equivalent number of cans.

Once the summer rebates and pricing go away so does my interest.  Plus, Big Grove Brewery is carpet bombing the retail beer landscape here in eastern Iowa with twelve packs now.

The year is one quarter behind us, which means that we are three months closer to a world where the phrase “President Donald Trump” is not something we have to utter every again save for historical remembrance.

It also means that it is a good time to check in on where I am at with my resolutions or goals for 2019.  Here goes:

Stop Buying Water for Your Shower

We all know that bottled water is bad.  It’s usually just tap water put into plastic bottles and dropped off in pallets at our local grocery store.  You end up paying dollars for something that costs cents when it comes out of the faucet in your home.  Add in the plastic waste and you get a bad environmental actor that no one wants to defend.

But what about your shampoo and shower gel?  Look at the first ingredient.  I am betting dollars to donuts that the first ingredient listed is water.  How much water?  Seventy to eighty percent depending upon the formulation. [1]  Shower gel is in the same boat and considering its rise to prominence over bar soap I am guessing that most people have multiple bottles of what is mostly water in their showers. [2]

Every one of those bottles of shampoo and shower gel are just a step up from buying bottled water.  I have always been a bar soap guy finding the entire loofah and shower gel combo unsatisfying on a number of fronts.  Foremost among those is what wondering what is lurking in the folds of that loofah that do not get clean.  Sorry for that image, folks.

Bar soap is the easy answer to shower gel.  Hell, it’s also one of the easiest things to get from a local provider because almost every farmers market I have been to over the past decade has a soapmaker or two.  Or you could get the soap that I like the best…Pacha’s Dirty Hippie.

The shampoo angle seems a little harder until you do a little digging.  I would not have thought twice about it until a friend re-gifted me a Lush Seanik shampoo bar.   All I could remember thinking was why I did not come across this concept sooner.  Now, I do not care to afford Lush’s products although I do love their ingredients and social bent.  Once the Seanik bar ran out I bought some J.R. Liggett Old Fashioned shampoo bars and I am working through them currently.

Bar soap and shampoo bars come with none of the packaged plastic waste that comes from shower gel and liquid shampoo.  If we really want to make a change in the way we consume things we really need to examine the nature of the products that we buy and the packaging that those products come in.  A little paper wrapper seems like a much better solution than an empty plastic bottle.

The Tesla Model X came out this week and I want one. But, at a starting price of $80K I might be better off looking at used Nissan Leafs costing under $10K. When will the Model 3 come out?

Note, there will be no Friday Linkage next week since I will be spending the week in Los Angeles evaluating suppliers for my job.

On to the links…

Coal Mine Starts Continue To Decline—This is the second step on the journey to the death of coal. If fewer mines are opening than fewer mines will be operating further eroding the ability of the fuel to be effectively and efficiently pulled from the ground. Let’s kick coal while it is down.

Is Cargill Backsliding on its Promise to End Deforestation?—Few large corporations are as hard to pin down on issues than Cargill. As a privately-held firm it is not beholden to the same reporting rules that allow shareholders to extract information from publicly-held firms. Perhaps public pressure can take some of the slack and get Cargill to be a good corporate citizen. I am not holding my breath.

Nearly Half of U.S. Seafood Is Wasted Annually, New Study Shows—Food waste is the single biggest environmental issue that we have control of in our own homes and through our consumption patterns. Every piece of food that we throw away is a wasted opportunity to reduce our impact on the world.

Solar Hit ~7% Of Spain’s Electricity This Summer—Damn, 7% from solar is impressive any way you slice it.

Brazil Doubles Its Solar PV Target To 7 GW By 2024—What is the target in the good ol’ U.S.A.? Right, we do not have a national target for solar.

North Carolina Passes 1 GW Of Installed Solar—That seems like a lot of solar for one state that is not known as a particularly sunny locale.

Fracking has a Big Water Footprint, but That’s Not the Whole Story—The extraction of fossil fuels is a story about water. Without a lot of water it would not be possible.

Electric Buses Could Lead to Significant Savings Even for Smaller Cities—Why the government is not pushing electric buses and garbage trucks I will never understand. These vehicles seem like perfect candidates for conversion.

Saving Electricity—Spend a few minutes going through the various categories to see where you could be saving a lot of watts. Since I cannot get solar panels in the near term—thanks homeowner’s insurance—I am going to try and reduce my rolling twelve month usage below 300 kWh.

‘Thirsty’ Concrete Absorbs 880 Gallons of Water a Minute to Minimize Urban Floods—Why is this stuff not replacing hard concrete and asphalt in southern climes affected by heavy seasonal rains?

My Green Misadventure
Blog at WordPress.com.